skip to main | skip to sidebar

How To Rescue Lost Mallard Ducklings 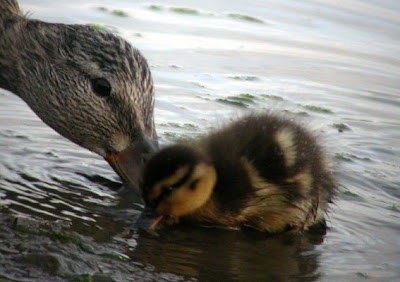 At this time of the year (from April) ducklings may get lost. This is not supposed to happen as ducklings, although capable of feeding themselves, are entirely dependant on their mother for warmth, security and guidance. This is how things are supposed to happen:

The mallard pair, male and female, will bond during the winter (these pair bonds can last for life) and a nest site will be found. They will choose a quiet place near water usually, but have been known to nest in the flowerbeds of shopping centres, in back gardens, near busy roads etc. The female lays eggs over about two weeks finally producing 10 – 15 eggs. Once all eggs are laid the female will sit on them and incubate for 30 or so days. During all this time the male will discreetly hang around the area protecting the nest and mother. Finally one day inApril or later in the summer, the ducklings will hatch and the mother will lead them to water to feed at the edge and maybe to have a quick swim. The water is also the getaway in case a predator arrives so they will naturally go onto water when they are disturbed. Mallard ducklings can only tolerate being on water for short periods as they quickly get cold and need to return to the warmth under their mother’s wing. They cannot produce the oil that insulates their mother yet and so obtain iil from being brooded by the mother. The ducklings will remain with their mother for a further eight weeks or so until they can fly and then are completely independent.

If you find a single ducking by itself it is critical to get it back to its mother as quickly as possible. Generally the duckling will call continuously for its mother and if there is no disturbance the mother will soon return. However if there is no sign of the mother after an hour or more and there is no obvious disturbance (you should observe from a hidden place), the duckling may be completely separated from its mother. This could have occurred or a variety of reasons, eg duckling or mother and brood could have been carried away on a stream, or frightened by a wild predator or domestic cat or dog, perhaps crossing a road, one duckling got left behind. So if the mother duck definitely cannot be found, put the duckling in a warm box with some wet porridge for feeding and a sacucer of water for drink – duckling will eat some porridge and then drink water to swallow. Now try again to find the mother duck by backtracking from where the duckling was found.

If there is no sign of the mother there are three options:

Release the duckling at the nearest point to where you think it lost its mother ensuring that there are no predators or cats/dogs around; the mother may be hiding somewhere waiting for you to go away.
Contact an animal rehabilitation centre and ask them to take the duckling or find it a home.
Keep the duckling and rear it yourself until it is old enough to take care of itself (up to eight weeks) – it will need food, warmth, access to muck/water, and a secure pen. Release it to a place where there are other mallard once its flight feathers have pushed. Details of caring for ducklings are here:
Try to release it to another brood. Generally the new mother will not recognise its call and reject the duckling, even attacking it, but if there are many broods on the same pond, it may have a chance in the confusion, particularly if the duckling is a few weeks old.
Find a local farmer with ducks and put it in with his – a domestic duck may be less fussy than a wild one. I have even heard of a hen adopting a lost duckling.

Remember that ducks are very prolific and it is nature’s way that only one or two of the brood of up to 15 ducklings will make it to adulthood. If it his were not so and every duckling survived to breed we would be quickly drowning in ducks!

This advice generally applies to all dabbling ducks (ducks that filter-feed on mud including pintail, teal, wigeon, gadwall, gargany and others). In the case of shelduck, lost ducklings are much more likely to be adopted by other ducks (aunts). 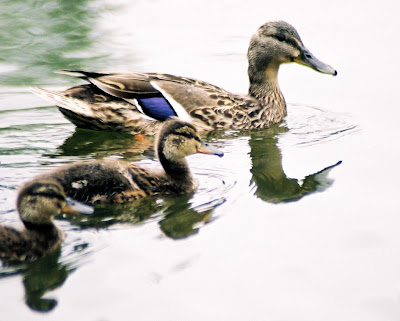 Posted by North Louth Branch of Birdwatch Ireland at 6:02 AM

i acuctially just found an abandoned duckling, and did exactly what they said to do, and still cannot find the mother, so i now plan on taking it to the local zoo where they have a duck exhibit. there are many mother ducks there, and it is not an enclosed so that when the duckling is able to fly, he can leave.

Love it! Very interesting topics, I hope the incoming comments and suggestion are equally positive. Thank you for sharing this information that is actually helpful.